Customers are reporting issues after doing Windows Updates to Win 10 v1909 . More details will be posted here as they become available to us. If you are experiencing issues after installing this update please let us know so we can help inform others.

Since we don’t know exactly how version 1909 will hit the fan, and whether it’ll introduce any bugs, we are advising to hold off on this update for now.

Remember, that if any Microsoft update causes issues for you, you can usually roll it back by simply uninstalling the update. Similar to how you uninstall a program, you can do the same with with most Windows updates.

The update, labeled KB4512941, addressed the Visual Basic 6, VBA, and VBScript problems that Microsoft fixed earlier version of Windows 10, Windows 7, and Windows 8.1 a few weeks back.

It also addressed over two dozen other key non-security bugs that made it an appealing optional update to install. However, some of those who grabbed the optional August 30 update for version 1903 have now started complaining of high CPU usage immediately after installing it.

What can you do about it?  Multiple Windows 10 version 1903 users who report CPU spikes after installing the update believe the issue is caused by the Cortana process SearchUI.exe. Some users reported resolving the issue after disabling that process. Others have resolved it by uninstalling the update named KB4512941.

To check which version of Windows you are running, click on Start> PC Settings>Update & Security>OS Build Info

Microsoft released a boatload of patches for various flavors of Windows 10 via Cumulative Updates (CUs). Read More.

Microsoft may want to consider renaming the now-infamous Windows 10 October Update version 1809. First it had to be pulled from the public due to critical file-deleting bugs. Then it was finally reissued in the middle of November. This default apps bug is still broken. Machines with Intel HD Graphics drivers are losing their sound (again). iCloud syncing is broken. And now Microsoft says Windows Media Player is broken in the latest cumulative update.

“After installing this update, users may not be able to use the Seek Bar in Windows Media Player when playing specific files,” Microsoft writes in its known issues document. “Microsoft is working on a resolution and will provide an update in an upcoming release.”

As with most bugs of this nature, it’s difficult to determine how widespread the problem is. It’s certainly not a crippling one (just use VLC Player instead), but it’s baffling to me that a problem like this can be introduced into such a mature piece of software. – (source: Forbes.com)

NOV 13, 2018 – Microsoft resumes rollout of October update. This comes after having to pull it last month just days after releasing it as it was causing customers to lose data. That said,  tread cautiously with this update. To have more control over with automatic updates are applied, see this page on our site.

NOV 2018 – Microsoft has reportedly paused this update v1809 referenced below until the bug is corrected. If you want to be in control of Windows 10 Updates, you can turn them off here.

OCT 2018 – Many customer are reporting recent Windows 10 updates are automatically rebooting their computer, in the middle of the day and without warning. This can happen when you least expect it without giving you the chance to close or save your work. Thanks again Microsoft.

To avoid rebooting in the middle of the day here is the setting where you can turn that OFF.

Note this setting applies only to Windows 10 before version 1803.  To see which version you have, go to Start / PC Settings  and in the right column click on OS Build Info. It will tell you which version of Windows 10 you are currently running on.

Go to : Start / PC Settings / Updates and Security / Restart Options. It looks like this: 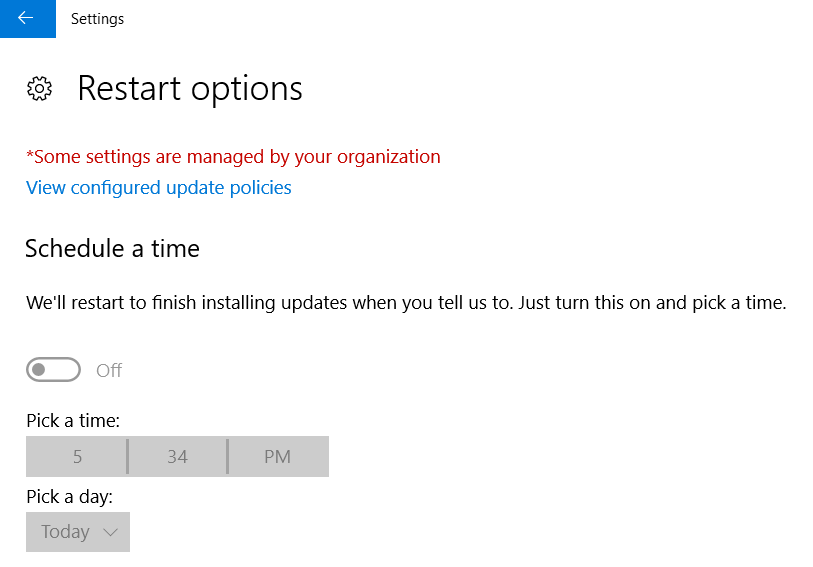 For Windows 10 version 1803 and higher this option was removed by Microsoft unfortunately.

The Restart Options was removed starting in version 1803 of Windows 10, and replaced with Change Active Hours setting. Perhaps Microsoft found and fixed the auto reboot without warning. note the last sentence. “…we won’t restart without checking if your’re using it“. Hopefully that is the case we will let you know by updating this page if this problem is corrected in version 1803 and higher. 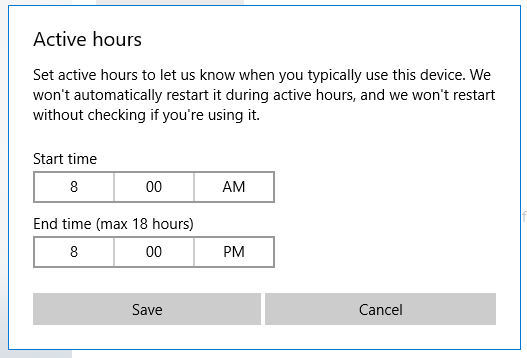 If you are sick of Windows 10 automatically updating your computer you are not alone. Learn how to Turn it OFF here.

October 2018 – BEWARE !  This new update is causing a serious problem. One that can’t be reversed. If you’re not enthusiastic about potentially losing all of your data in your USER folder such as My music, My Pictures and My Documents etc Read this now!

Note the latest solid Windows 10 update as of this writing is version 1803. To see which version you have, go to Start / PC Settings  and in the right column click on OS Build Info. It will tell you which version of Windows 10 you are currently running on.

If you’ve upgraded to Windows 10 and now your keyboard has stopped working particularly on laptops, you’re not alone. Many other Windows 10 users are reporting the same problem, especially after installing the Microsoft KB4074588 .

If your keyboard has stopped working see this page for steps on how to fix it and prevent it.

DEC 2017 – You may have noticed that your system took a very long time to complete a Windows 10 update. This is because Microsoft recently rolled out a major Windows 10 update called “Windows 10 Falls Creator 1709“. This major update has been a bumpy ride for users, see their biggest complaints here.

If you have a newer computer this may not be an issue for you. If you have a computer that is more than 4 years old, this update may cause lots of issues with  your computer, video or other peripherals. Here is what you need to know about that.

Windows 10 is rebooting over an over

OCT 2017 – New Microsoft update may cause Windows 10 systems to go into a reboot loop.  Read this fix now. Also see how to turn OFF Auto updates in Windows 10.

Computers Not showing on Network

By default,  computers in your local network should be visible when you browse for a network device with File Explorer. With recent changes in Windows 10 version 1803 some computers are only accessible via their names or IP addresses. To fix this annoying issue, you can apply a simple workaround. (special thanks to Winaero for this solution):

Fix  for Network Computers Not Visible in Windows 10 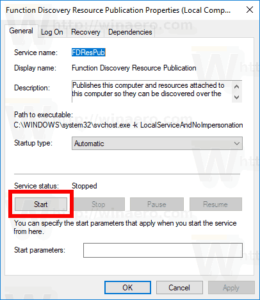 If you are in the market for a new machine, consider a QuadStation Computer System. These high quality systems support from 2 to 12 displays,  choose a system below for full details and pricing.  Turnaround time is just a few days.​​

It will be the longest lasting computer you have ever owned!