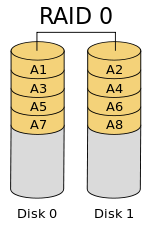 Striped Set (2 disks minimum) without parity. Provides improved performance and additional storage but no fault tolerance from disk errors or disk failure. Any disk failure destroys the array, which becomes more likely with more disks in the array. The reason a single disk failure destroys the entire array is because when data is written to a RAID 0 drive, the data is broken into “fragments”. The number of fragments is dictated by the number of disks in the drive. Each of these fragments are written to their respective disks simultaneously on the same sector. This allows smaller sections of the entire chunk of data to be read off the drive in parallel, giving this type of arrangement huge bandwidth. When one sector on one of the disks fails, however, the corresponding sector on every other disk is rendered useless because part of the data is now corrupted. RAID 0 does not implement error checking so any error is unrecoverable. More disks in the drive means higher bandwidth, but greater risk of data loss. 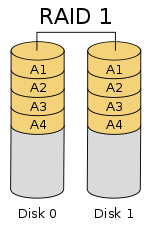 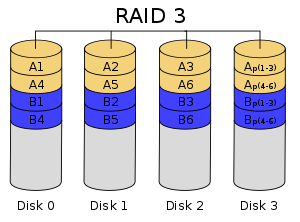 Striped Set (3 disk minimum) with Dedicated Parity, the parity bits represent a memory location each, they have a value of 0 or 1, whether the given memory location they represent, is empty or full, thus enhancing the speed of read and write. This mechanism provides an improved performance and fault tolerance similar to RAID 5, but with a dedicated parity disk rather than rotated parity stripes. The single disk is a bottle-neck for writing since every write requires updating the parity data. One minor benefit is the dedicated parity disk allows the parity drive to fail and operation will continue without parity or performance penalty. 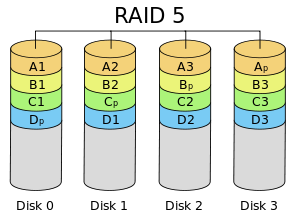 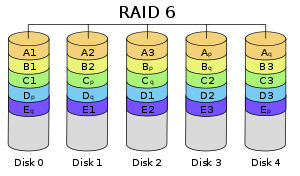 Striped Set (4 disk minimum) with Dual Distributed Parity. Provides fault tolerance from two drive failures; array continues to operate with up to two failed drives. This makes larger RAID groups more practical. This is becoming a popular choice for SATA drives as they approach 1 Terabyte in size. This is because the single parity RAID levels are vulnerable to data loss until the failed drive is rebuilt. The larger the drive, the longer the rebuild will take. With dual parity, it gives the array time to rebuild onto a large drive with the ability to sustain another drive failure.

RAID 1+0: (a.k.a. RAID 10) mirrored sets in a striped set (minimum four drives; even number of drives) provides fault tolerance and improved performance but increases complexity. Raid 10 creates a striped set from a series of mirrored drives. The array can sustain multiple drive losses so long as no mirror loses all its drives.

How to Set Up RAID on Your PC

Configuring two or more hard drives in a RAID setup can requires a certain level of technical knowledge. If you are not confident in your abilities, hire a professional to do this for you.

Setting up any raid requires a ‘from scratch’ load of the operating system. In other words if you have a current operating system installed, you will need to wipe the drive and start from scratch. This is because when setting up any RAID level, the BIOS must be configured for RAID prior to the OS being installed. Also the drives need to be prepared during the RAID setup process.

RAID comes in a number of flavors–or levels–that offer data protection, enhanced hard-drive performance, or both. In addition to the seven core levels of RAID (RAID 0 through RAID 6), you’ll encounter a slew of variants and combinations. Following are the RAID levels you’ll find on affordable, consumer-level RAID adapters.

RAID 0: This setup increases hard-drive performance by spreading, or striping, data over two drives so that it can be read and written more quickly. Unfortunately, such an array provides no data protection–in fact, it actually increases the chances of data loss since the failure of any one drive in the array results in the loss of all data stored on both drives. RAID 0 setups are standard on high-end gaming and graphics PCs, and provide a measurable albeit modest performance boost for games, graphics applications, and other hard-disk-intensive programs.

RAID 1: A RAID 1 setup protects data from a drive failure by simultaneously writing data to two hard drives: a master drive and a backup (or mirror) drive. Since the second drive carries an exact copy of the first, it provides no usable storage capacity. RAID 1 offers no gain in drive performance.

RAID 5: Though you get both faster disk performance and data protection from this setup, it requires a minimum of three hard drives. Instead of using an entire hard drive as a backup, RAID 5 spreads redundancy information–called parity bits–across all of the array’s drives, increasing the proportion of usable disk space. A three-drive RAID 5 setup presents two drives’ worth of storage capacity, a four-drive array offers three drives for storage, and so on. If one of the drives fails, the data content of that failed drive can be recalculated from the parity bits on the surviving drives and written to a new, replacement drive.

RAID 1+0 or 0+1: Some adapters support combinations of RAID 0 and RAID 1, which provide both data redundancy and increased disk performance. Since these nested implementations are not standardized, names and functionality can vary from vendor to vendor. RAID 10, RAID 1+0, RAID 01, and RAID 0+1 are all common names for nested arrays. These RAID combinations require a minimum of four hard drives.